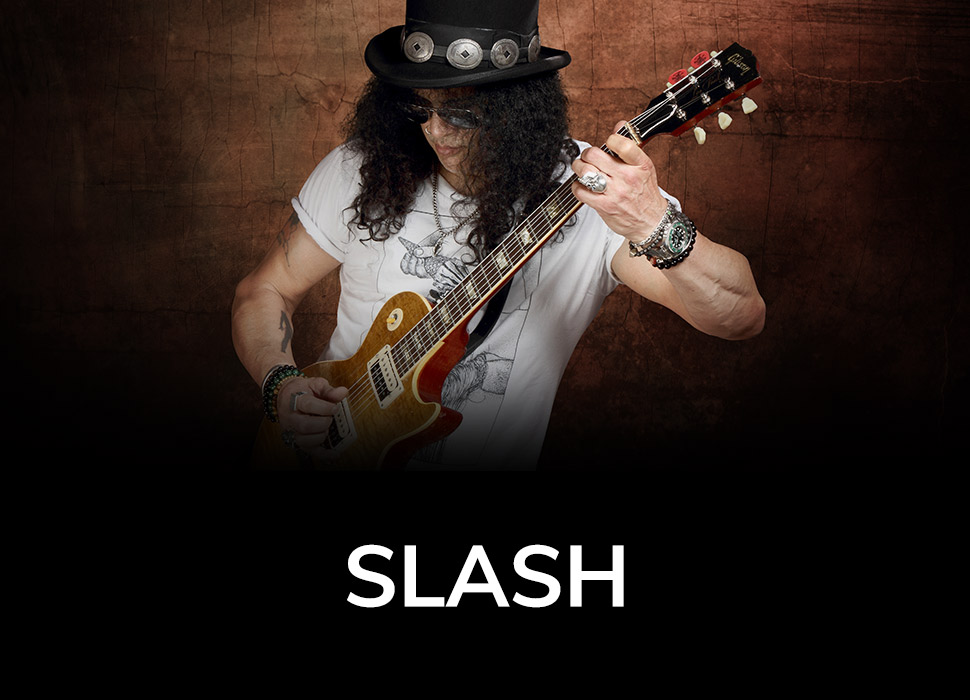 Sl
Slash Registered on 2021-11-25
66 presets
390 followers
0 following
About Saul Hudson, mainly known as Slash, was born on July 23, 1965, and was raised in Stoke-on-Trent. Both his parents worked in the entertainment business, his mother being a clothing designer (she did some of David Bowie's costumes) and his father being an art director for a record company. When Slash was 11 he moved with his mother to Los Angeles, leaving his father behind in England, although he eventually joined them in L.A. years later. Slash became sort of an outsider at school since he didn't really fit in with other kids. In the mid 70s his parents separated and Slash moved in with his grandmother. During this time Slash got interested in BMX riding, and went on to win several awards and money in competitions. When he was 15 he got his first guitar, and his schoolwork started to go downhill as he skipped class to sit playing guitar all day. Slash eventually got so tired of school that he dropped out in 11th grade. As he lived in Los Angeles, a city flourishing with new, young rock bands, he quickly got in touch with people to jam with. After meeting Steven Adler the two of them formed a band called Road Crew. Then he met Izzy Stradlin who played in a band with Axl Rose, and after hearing Axl sing live, he was set on getting him in his band. Soon a bass player answered one of Slash's ads in the paper, and Slash (guitar), Steven (drums), Izzy (guitar), Axl (vocals) and Duff McKagan (bass) formed Guns N' Roses in 1986. Soon enough, GNR were known across the globe as the new rock n' roll sensation. Album sales went sky high and the band was having a blast on their world tours, and during this time Slash worked with artists like Michael Jackson on the Dangerous album and Lenny Kravitz, just to name two. But after the Use Your Illusion tour, GNR decided to take a break. Slash however, needed to play music and so he formed his own band Slash's Snakepit. With the success of this bands album It's Five O'Clock Somewhere (1995), Slash told the public that Slash's Snakepit would be back again. During this time Slash and Axl were having some heated arguments about Guns N' Roses and what would happen next. Guns N' Roses as we knew them then, was terminated by the result as Slash decided to leave the band, handing all rights of the band name over to Axl. After this Slash did a few gigs here and there, formed a band called Blues Ball who played blues covers, and even brought back Slash's Snakepit as he said he would, although they didn't last very long this time either. In 2000, Slash met Perla Ferrar and on October 15, 2001, married her. It's not surprising that he wore black leather pants, a white shirt and his faithful black leather jacket to the wedding! His new status as a married man didn't slow him down, though. In 2003, Velvet Revolver was formed by the former members of Guns N' Roses; Slash, Duff and Matt (who replaced Steven in 1990), Scott Weiland (vocals) from Stone Temple Pilots and Dave Kushner (guitar) from Wasted Youth. Velvet Revolver's debut album Contraband (2004) was long-awaited and sold incredibly well. They are now going to show up on the second Live Aid concert along with many other huge artists, which will be held in London. Velvet Revolver's plans to become a rock band of great magnitude are definitely in the works, and Slash himself has earned his title as one of the greatest rock n' roll guitar players in history.
Nickname: Slash Country: United States of America

We use cookies and other tracking technologies to improve your browsing experience on our site, show personalized content and targeted ads, analyze site traffic, and understand where our audience is coming from. To find out more or to opt-out, please read our Cookie Policy. To learn more, please read our Privacy Policy.

Click below to consent to our use of cookies and other tracking technologies, make granular choices or deny your consent.

Eliminate cookies from your equipmentYou may delete all cookies that are in your equipment by eliminating the navigation history from your browser: that done you shall delete all cookies from the sites you visited. Remember however, that you may lose some information which you saved beforehand (for example, access credentials or site preferences).

Blocking cookies The majority of modern browsers allows users to stop the creation of cookies on their equipment, but in this case you must manually adapt certain preferences every time you visit a site or webpage. Moreover, certain functional services may not work correctly (for example the connection to your profile).